Condensation occurs when the moisture content of warm air settles on a colder surface, because the colder the air, the less moisture it can hold. This is most noticeable on external windows, for example, as they are typically colder than the air in a room, and they cannot absorb any water so it collects on the window surface. When warm moist air meets a colder porous surface, such as wallpaper on an uninsulated outside wall, it will not show but will still result in dampness. Apart from the unsightly appearance of condensation, it can rot window frames by puddling and helps create an environment for black mould to grow, which has health and cosmetic issues.

Apart from natural causes of moisture, there are many normal activities which will add to the moisture content of air in the home. Breathing, cooking, houseplants, the drying of washing and using the shower or bath will all contribute, and as homes become increasingly better insulated, this accumulated moisture cannot easily disperse up chimneys, through gaps in windows or floorboards, under doors and so on. Of course, some dampness in the home is caused by leaking pipes, holes in the roof or damp walls and floors, and if it is, it should be treated immediately. We are going to concentrate on unavoidable everyday causes, and the most obvious remedies for these. 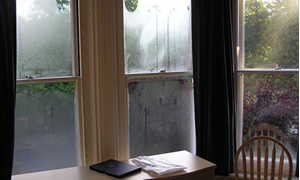 How can condensation in the home be reduced or eliminated? There are several ways:
- Produce less moisture. There are some practical ways of doing this, such as cooking with lids on pans, using a tumble dryer for clothes and venting it directly outside, but realistically, the occupants of a house are not going to breathe less, so some moisture build up is inevitable
- Ventilate regularly. If you exchange the warm moist air in the home for cooler, dryer air, there will be less moisture to condensate. However, this will also reduce the temperature in the house and can make it less comfortable, so is not an automatic solution
- Contain moisture to areas that can be ventilated. Keeping the bathroom and kitchen doors closed and just ventilating these rooms, for example
- Install a de-humidifier. It may be cheaper to buy and run a de-humidifier than a tumble dryer
- Keep the ambient temperature in the home to a low but acceptable level, so the air retains most moisture until it can be ventilated. It may be more efficient to do this than to have bursts of heating, as constant low level heat will keep the fabric of a building warmer and therefore less likely to condensate moisture

Because we are often asked about whether Easyfix Secondary Glazing systems will eliminate condensation, we looked in more detail at the causes and remedies, as above. On the face of it, as Secondary Glazing will have little effect on the airborne moisture in the home, it cannot solve any condensation problem. On the other hand, it helps retain heat in the home which can cause less moisture to condensate, and by insulating the most obvious place for condensation to occur, i.e. the outer windows, it certainly can reduce the worst visible effects. To see the impact at first hand, we ran a simple experiment in a room where Magnetglaze Sash was installed on several sash windows - the contrast between secondary glazed and unglazed windows can be seen in the video alongside.

The test was set up as simply as we were able. On a fairly typical winter evening, a secondary glazed living room had one window cleared of the extra insulation; the room was then used as normal, the heating was off during the night and fortunately, as predicted, the temperature fell to about 4°C. Condensation resulted as can be clearly seen.